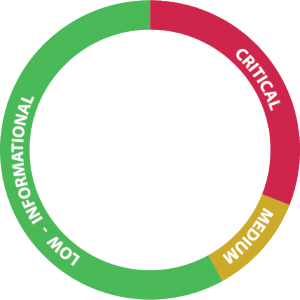 VeraCrypt 1.18 and its bootloaders were evaluated. This release included a number of new features including non-western developed encryption options, a boot loader that supports UEFI (modern BIOSes), and more.

This public disclosure of these vulnerabilities coincides with the release of VeraCrypt 1.19 which fixes the vast majority of these high priority concerns. Some of these issues have not been fixed due to high complexity for the proposed fixes, but workarounds have been presented in the documentation for VeraCrypt.

Because of this audit, VeraCrypt has issued a number of fixes to both the application and the bootloader in 1.19.

VeraCrypt is much safer after this audit, and the fixes applied to the software mean that the world is safer when using this software.

Please donate to OSTIF if you want us to continue this valuable work. We plan to continue this project indefinitely, as long as the community continues to support us. Every donation makes the internet stronger, and safer.

I’d also like to extend a special thank you to Fred, Jean-Baptiste, and Marion at QuarksLab for conducting this audit, to Mounir at Idrix for his enthusiastic participation and continued development of this crucial open-source software, and to VikingVPN and DuckDuckGo and all of our individual donors for the funding to make this audit possible. We have all made the digital world a little bit safer for all of us.